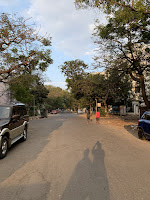 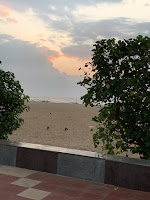 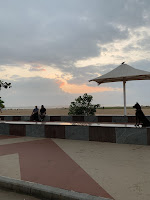 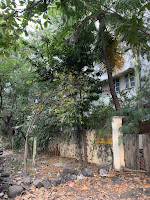 I always feel completely at home in India. Chennai, with all its so called modernity still has old world peace and charm. It is a city that has arrived at the present era kicking and screaming. There is a quiet feeling of timelessness underneath the chaos of traffic, which is not even that awful. The sky is still a nice blue and there is greenery all around. The buildings are shabby, the people unremarkable, not exactly preoccupied with the fashion of the day. The streets are not clean by any stretch, with leaves and debris strewn all over. There are stray dogs everywhere and there is dust and grime even in the glossiest of glass covered exteriors. And yet, it has a healthy aspect to it what with the moist ocean air, the bright sun, the lush greenery and a silence only broken by sounds of cawing birds and, in the distance, traffic horns and ocean winds.

When I woke up early this morning and sat to meditate, aware that the ocean was 100 yards away and the crematorium 50 yards over on the other side and I heard the cawing of the crows, I had a strange sense of oneness with something deep and primeval. There was a timeless quality to my breath as an expression of consciousness, and the spirit of my father appeared to be just in another realm in the multiverse. Everyone and everything appeared to co-exist in a suspended state, with no beginning or end. Alas my consciousness was still in the realm of the uni-verse but something in me felt part of all those other forms of existence! This place gives me access to the deepest recesses of my soul and I have dreams that feel so real the emotions from them linger and the tangible reality lends a psychedelic quality to my sensations that burst over to the brim. On my morning walk, I witnessed the beautiful sunrise on the beach and once again found my individuality completely subsumed in the larger drama of the universe that goes through its motions, as witnessed through the lens of my mind conditioned by time and space, but which otherwise has nothing to be calibrated against, and so, just is.