A beautiful City, Music and Education 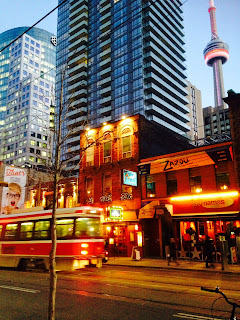 Yesterday, I enjoyed a beautiful night out on the town with a close friend. We were at the iconic Royal York Hotel rubbing shoulders with the City’s well known “do gooders”. The night was crisp and cold but the sky was clear and the City sparkled with a vibe that reflected its diversity and modernity. The crowd at the banquet was a friendly and cheerful one representing the City’s cultural richness. We had wonderful dinner companions. An Associate Professor of Music, Stephanie, who taught music history, played, composed, sang and taught classical and choral music, a singer in one of her choirs, and a Turkish real estate agent. The conversation was scintillating especially when Stephanie reminisced about the time she played the organ accompanying evensong at the enchanting St. Paul’s Cathedral in London. She waxed prolific about the choral music scene in London and I rushed home to message my daughter Uttara, a London resident, about potentially joining a volunteer choir there, given her musical interests and latent (!) abilities.

Dinner was lovely. There were delectable spinach pastries and vine leaf rolls as starters, a delicious pasta dish for the entrée, salad and, for dessert, Noah’s pudding, which came complete with the recipe.

Following dinner came the headliner. The key-note by the University of Toronto President, Eric Gertler, which ended up being a missed opportunity. At a time when universities have to rethink their relevance functioning in their current form, given the debt load students carry unable to find jobs in the current market, the largest university in Canada bears responsibility to shine light on a new path? With several key influencers present in the room, this talk should have challenged us to re-imagine a world where physical classrooms are replaced by all forms of synchronous and asynchronous learning, where the portals of education find students wherever they are in their lives and where there are dynamic and synergistic collaborations with alumni, industry, other institutions and even nation states! This is the time to rethink the revenue model that universities operate by, given the role education has come to play as a life- long pursuit what with technological advancements altering our reality at break-neck speed. We simply have to keep up with these changes, to do better at work and to live fuller lives! Gone are the days when we could pay lip service to words like innovation and civic engagement, without actually demonstrating how this would look. If universities are only concerned with maintaining market share and boundaries, in traditional ways, then all they will be left with are empty classrooms and expensive real estate, while the educational start-ups ride the high waves. Do we want Canada’s largest university to maintain the status quo, with a deluded sense of its importance in its current form, or do we want it to rise up to the greatest challenges that universities are facing today and pave the course?

I marveled at the symbolism of having a music professor at our table. Especially one who was disrupting the world in her own little way. She was bringing classical music from the ivory tower to untrained singers and lay audiences, breaking down barriers and unraveling the mystique surrounding it. And the diversity of folks gathered in that room each had a similar story to share, a piece of wisdom to impart to help both Toronto and Canada stay ahead of the curve, with a shared commitment to achieving excellence in this knowledge economy. I am proud to say that we have contributed to this in our own small way at MCIS. We continue to help newcomers get a leg up in life qualifying them to work as language professionals, making our courses both geography agnostic and asynchronous.

MCIS offers several on line skills building courses related to language training (www.mcislanguages.com)
Free online training to address human trafficking (built under the auspices of the Ontario Ministry of the Attorney General) is being offered to social work students at some post secondary institutions with wonderful results! Check it out at http://helpingtraffickedpersons.org/

Posted by Latha Sukumar at 9:23 AM No comments:

All I needed was a great pair of shoes and a warm coat!

I love to walk. My mom says I started early and once I did there was no stopping me. We lived in a large colony in Bombay up to my 6th year and search parties were on the look out for me every single day, following my long disappearances. I made friends easily and therefore invited myself into my mother's friend's homes when I needed to rest from my wanderings. Those were innocent times and luck was on my side in that we lived in a locale where people looked out for each other. However, this was no small colony and my mother's panic must have known no bounds especially after I was once found stuck between 2 floors in one of those cage elevators when a cruel young kid had pulled the door shut with me in it and someone from upstairs had pressed the button. Anyway all this notoriety resulted in my being nicknamed Odukaali (wandering legs).

The fact is I simply loved to walk. I must have inherited the gene from my father who walked everyday, rain or shine, from before I was born. As a teenager I joined him on weekends and school holidays. He loved having mom or us kids as walking buddies and regaled us with interesting stories about ordinary people and I lapped it all up, especially the one about how my future husband would be the best match for me! I tried to keep up my walking after coming to Canada. However, with the demands of a yoga routine and career my walks became more sporadic and even more so in the winter.

It was too cold or too slippery were the excuses that I readily used to talk myself out of it. I took to the treadmill sometimes. And yet, the hill on which our house is located is a favourite with my friends Sophia, Bill and Diane. Sophia a deeply spiritual woman who considers the hill a sacred place with divine energy. The three of them walk every day, through the winter. Bill is 87. In the fall he raked the leaves in his yard by himself and filled 28 bags. This hill is not for the faint-hearted and he does at least 3 everyday. Sophia who is in her mid 60s does 8 in under 2 hours and Diane who is in her mid 50s jaunts up and down as if she is taking a walk in the park! Sophia is the one who lured me out a few summers ago. Like my dad she is a wonderful storyteller and has bags of tales about her healing practice, her patients, her beautiful mediterranean summer garden, health fads, gluten free recipes and of course her trips to Corfu, Greece where she hails from. I have joined the group in the summer and on weekends but have chickened out when the barometer hit 0 Celsius.

Not this year. No more excuses. I went out and invested in a good pair of walking shoes. The daughter left me her Canada Goose jacket and hiking boots as further incentive and I apparelled myself with the rest of the cover. I am out on the hill with the first light on weekends and holidays. I will figure something out for weekdays. I still pant up and down and am kept buoyed by Sophia's stories, Diane's words of encouragement and Bill's sheer presence. I do at least an hour. And really there is no substitute for filling your lungs with fresh air, listening to the cadence of your walk, feeling the incredible gratitude that you must for your limbs and lifting your mood with the endorphins that flush your system at the end of it. I am convinced that Pharma companies will do no business if everyone walks away their depression, insomnia and what not! I have overcome serious sciatic pain with this. And the mental clarity and quietude that follow are just the icing on the cake!

So put on your shoes and a warm coat and walk your troubles away!
Posted by Latha Sukumar at 5:21 AM No comments: