Paris will have to wait!

I never understood what makes people different until I spent 2 weeks with an adult daughter whose priorities and approach to life are different from mine. Or maybe it is this generation of professional women. They are fiercely independent and uncompromising in their attitudes and principles. They are clear and guilt free about life choices - or seems that way for the most part.

We of the sandwich generation are yo yos, vacillating between pleasing and serving someone or other - parents and siblings, kids and grandparents. In fact our identity and relevance are wrapped around who we serve. We therefore make few decisions to plan our time off and wait till we are needed somewhere for someone. The icing on the cake is the gratification that comes from feeling useful. And as though addicted to that feeling, we keep coming back for more. Now, whether we are really useful is another matter. People may have managed even better without us? Very likely.

However, for once, on this recent trip to India, I found myself being useful. Along with my little sister, always the rock, I provided some physical and emotional support to Amma who underwent a complicated surgery.

So how was I useful ? For one, we managed her fears by consciously taking the drama out of everything. This we did by being the filter through whom she communicated with the rest of the world. Given the Indian context, where people have a natural flair for "showing concern" (aka meddling), this was a useful function.

Second, my sister and I also protected her as much as we could from a system where nurses are glorified personal support workers, overworked, exploited and directed by doctors. Being twice removed from the logic of a decision, around pain management, for eg, and unable to second guess a distracted doctor's decision or omission, they cannot be relied upon to know fentanyl should be administered at no more than 3-5 ml per hour. My encounters with a few, over that week we spent in the hospital, must have definitely given them PTSD.

Last but not least, I took charge when Amma got home, as her primary care provider, cooking for her, helping her with ablutions, motivating her to eat and to exercise per the physiotherapists' instructions. Poor thing had to relinquish control of the kitchen and endure my cooking. Wow I really enjoyed the power that came from wielding the spoon and shushing her objections! The last week I spent training my successor, and her substitute and hers...ok don't get me started.. the newly appointed help(s).

Not to be outdone by me, my husband has been focussed on the care of his parents during the past year, over 3 different trips to India. I was there on two of three and missed one to travel to England, where I helped our daughter move house and settle in! Since this has been and will be our lot over the next few, alternating between care of various family members, Paris will have to wait!

Posted by Latha Sukumar at 9:28 AM No comments:

Chennai tales - Jasmine all around me

Jasmine all around me

Chennai's stifling humidity is unmatched. I came home with Amma from central air conditioning at the hospital to the spacious three bedroom flat she has by Elliot's beach on the Coramandel coast off the Bay of Bengal. I don't know if the humidity is inspite of it or because of it. I don't know if it is always this intense at this time of year. Anyone who has not lived through this cannot imagine the feeling of being completely soaked in perspiration 24/7. While the A/c in the bedroom provides some reprieve, the movement in and out of A/c is hard on the body and just makes the experience of being outside even harder for someone like me who never breaks a sweat in Canada. So I decided in order to cope I had to stop complaining and go with the flow. I wear thin cottons, I shower a few times, keep hydrating and tell myself how incredibly healthy it is to dispose of bodily waste this way! By the way, I have a new appreciation for why the cotton "nightie" is the preferred choice of dress for young and old here. Wrapping oneself in a saree and keeping it on longer than necessary is monumental effort.

So now that I have come to accept this humidity with self aggrandizing righteousness, I have started to smell the jasmine (and not the sweat!) all around me - literally. Enter Kala. She is a young woman in her forties who works at an eye clinic and boards with Amma. She has a meagre income. She pays no rent and does light duties around the house while being company for Amma at night. Her presence gives us a lot of comfort since we did not want Amma, who is in her late 70s, living alone. Kala's meditation every evening, as she sits and watches TV serials with Amma, is stringing jasmine flowers. She spends a portion of her income to buy bags of loose flowers by the pound everyday, and patiently strings them close together with immense skill. By the end of the evening, the entire house is suffused with jasmine, the fragrance clings to the thick still and humid air, and she has made a long garland about 2 feet long. Early the next morning she cuts them into small 4 inch bits and adorns Amma's altar of gods in the kitchen. The sight and smell of the jasmine flower gives me a sense of homecoming! Kala is unique in that no one I know does what she does as a hobby. However, jasmine flower vendors making a living off selling flowers is ubiquitous here, and was a very important part of our life in Chennai growing up. It is no longer as affordable as it use to be to wear jasmine in your hair. For me it completes the experience of being home, humidity and all. A neighbour who has relocated from Delhi summed up Chennai for me. She said it is like a mother's lap. I could not have put it better and the jasmine flower which is unique to Chennai and the state of Tamilnadu makes it more so.

Recently we had a celebration in Toronto where you find me wearing jasmine. Now you know why TO, where jasmine is abundantly available, is also home! Also, Kala's handiwork!

Posted by Latha Sukumar at 9:25 AM No comments: 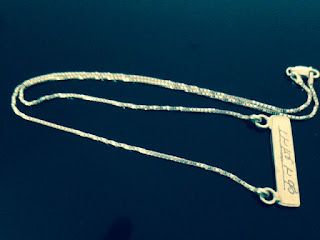 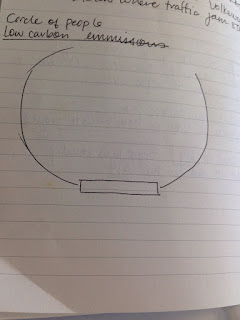 o Uttagirl called me up one day and said, “mom can I have a chain with a pendant that says gratitude in Sanskrit so I can remind myself to be grateful.”

I said “consider it done”. So she went on to send me a picture – a thin chain with a rectangular pendant and the words inscribed on it. Her preference was either white gold or silver. I looked up the word for gratitude in Sanskrit online and found there were two mentioned – Kritagnya and Kritagnyata. So I turned to a Sanskrit scholar friend, my sister and a few other folks and decided on the latter. I was all set to give the order to have it made, when my husband astutely said “you know the lettering should be in Sanskrit not English”. “Huhn?”, I muttered incredulously, not letting on that I had actually only intended for it be engraved in English lettering. My daughter who got wind of this conversation that happened in Toronto, way out in the UK, said “Ya mom, I cannot believe you had planned to have it engraved in English letters.” Now they were all mind-readers!

Anyway, the thing did not get ordered or made till my recent trip to India. Knowing Utta’s particular aesthetic sense, my sister Suja did not have the nerve to take on this mission and offered to go with me to the store when I was in Chennai. 10 days before my departure I still had this project weighing on my head. We finally made time to go to a known jeweller who named an outrageous price. He suggested also that the letters should not be engraved but should appear as letters and insisted also that we send him a printout of the word so the jeweller does not make any mistake in the spelling. This was all a bit much. We had not even asked him for the design ideas he was selling us on. So as not to displease him, we bought the chain from him but not trusting him to execute our chosen design, headed over to a silversmith located in tiny alley beside the Kapali temple lined with stores peddling temple jewellery that dancers wear. We found jewellers intently striking pieces of metal on an anvil and molding them on a small flame in that stuffy hole that passed off as their work space. We showed the owner the design and handed him the lettering. He said no problem, come back and pick it up next week and quoted us a fraction of the cost. It was as easy as that! The husband picked it up on the appointed day and we took a picture of it and sent it to Utta.

When I next checked my phone I found a message from the T girl which I then excitedly proceeded to open and read. One word said it all "Yikes". "What's wrong" I countered. "It’s all big and shiny. I was visioning something more delicate. That looks like a gang chain." I was rolling on the floor laughing. I said "Utta, what am I going to do with you?!" She said "Nada. Lol." I then pointed out "Gratitude?" She said "Yeah...its silver so I don't feel so bad if I have to change it." Did not sound like gratitude to me. Lol. But I grudgingly do have to agree with her!


Posted by Latha Sukumar at 9:18 AM No comments: