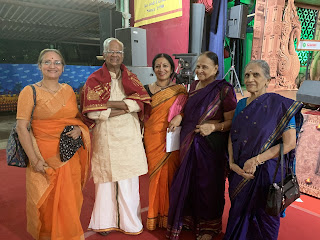 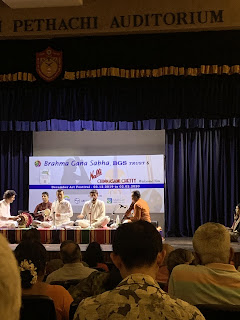 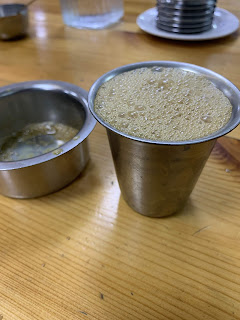 Only in Chennai can you sit in an air conditioned hall, in the heart of the city, and feel transported to another time and era as you listen to free classical music concerts. Most concert venues are located in and around Mylapore which still maintains its village like allure. Set back in time it is full of narrow alleys surrounding its most ancient temples and tank, street houses, age old saree and jewellery shops, restaurants serving traditional South Indian fare and concert venues with onsite catering, permanent and makeshift. It feels like a throwback to another time that is fast fading. A time when social media did not distract, and listening to concerts was the best you could do for entertainment. A time when devotion to craft for the sake of it was valued. However, before I wax prolific with romantic notions of times past, I must point out that it was a very caste conscious time and classical art forms were only available to a chosen elite of Tambrahms who formed the inner circle. There just was no ticket in, unless there was a patron promoting a prodigious talent as was the case with M.S. Subbulakshmi and a few others.

Today, there is an intentional effort afoot to make the coveted Chennai performance stages more accessible. Young people from here and abroad flock to make their mark in the Madras music scene at the December music festival which hosts over 3000 concerts in venues across the city from November through January. Technological advances have resulted in TV contests, videos of live concerts, online classes and various other immersive musical experiences that are geography agnostic. Hence the global spread and popularity of South Indian classical art forms. The audience in Chennai is the most discerning and therefore sets the bar high for artists. A live concert in this city is a challenge they must scale to make their mark pursuing complex, intricate, mathematically precise and yet infinitely creative art forms.

Speaking of access, sponsors such as saree magnates Chinnaswami Chetty of Nalli fame, continue to make most concerts available free of cost. However, as the population ages and streaming services catch on more and more, one wonders if this will continue to be the case? It is hard to tell. Are new artists serious enough to pursue these art forms as careers, to back-fill waning older artists, in sufficient numbers? One cannot really say. I do hope that the golden years of the Chennai December season are not a thing of the past and the musical extravaganza it presents continues to evolve, grow and thrive with the myriad technologies at our disposal. For eg, you can now buy tickets through apps, single and bundled, and you can watch concerts live-streamed for a price. There are music concerts bundled with buffet lunches. So you can have your pick! Since Carnatic music is all about improvisation, the connection with the audience is relevant and important for artists to feed off and offer the best experience - hence live concerts are imperative. I therefore hope the status quo of the December concert season proliferates to enchant and enthrall even more than before.

As for me, for some time to come, I hope to wear jasmine in my hair and join the many women elegantly dressed in colourful silk cotton sarees at concert venues. We will while away pleasant December evenings listening to heavenly music that evokes strong nostalgia of a simpler time when drinking coffee and eating tiffin between concerts at the Music Academy made for a wonderful Dec concert season.

Posted by Latha Sukumar at 1:01 AM No comments:

The wonderful world of Apps 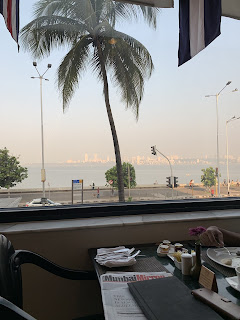 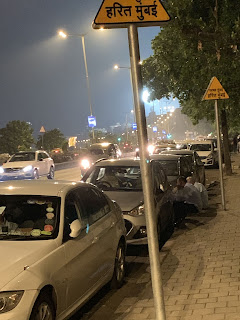 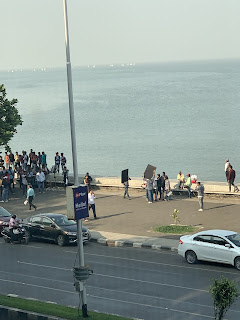 I was in Mumbai over the last three days attending a family wedding and thanks to wonderful apps had a grand old time that was seamless and perfect. Of course the airline tickets were booked through an app as well as our first night’s stay at a hotel with a gorgeous view of Marine Drive. Once at the airport we used the priority pass app to find a lounge and had a great breakfast before boarding the flight. We hired a car through a friend to go out on the first day, to our old haunts and residence in Colaba and Cuffe Parade, respectively. We reconnected with friends. We then took Uber everywhere and located restaurants to eat at, through apps. All these are pretty run of the mill and have become part of life in any metropolis now. So it’s not about these but about 2 special uses that I made of them that I want to talk about.

So after checking out of Marine Plaza in South Mumbai we headed to Powai close to where the wedding festivities were being held. It was at least an hour’s drive with low traffic volume. Meanwhile, the city’s pollution had aggravated my cough and I was struggling, and preoccupied with restoring my health to fully partake of the celebrations over the next two days. Naturally I forgot what I needed most, at the Marine Plaza. What else? My iPhone charger. But wait. I did not discover this till later that night! A lot happened before then, for which I made use of the first app worth mention.

So we arrived at the hotel where we had been booked by our relatives. We decided we needed to change to one closer to the venue and which was more spacious, with amenities and breakfast options. We arrived at the hotel where the Mehendi was being held, followed by lunch, and found out that the Sangeeth, later that night, was being held there. It was five star and pretty impressive so what better place, especially given my elderly mom and my persistent and annoying cough. A cousin who was already staying there vouched for the rooms, service and breakfast, so it appeared to be the logical choice. He had booked it through an app called Agoda. I had no clue how much the rooms would set me back by?! The hotel appeared quite fancy, and therefore would be, I thought, pretty pricey. I got on the Agoda app right away, and right there in the lobby of the hotel attempted to book two rooms for the first night. They were the last ones for that night, but were not available for another night. So I booked a second one, for three person occupancy for the next night, since one of our party of 4 was leaving that evening . Wonder of wonders the app gave me a 60% discounted rate, compared to if I had booked it there at the hotel, making it all very reasonable and affordable. All I had to do was pull up the app rate, and the hotel matched it, vitiating the need to go through Agoda to make the booking . Five star quality with amazing amenities and adjoining rooms with interconnecting doors and even special free upgrades, we smugly settled and rested before the Sangeeth. The air purifiers in the rooms, the luxurious hot showers, the bathrobes and slippers, an array of utility kits, coffee and tea, comfortable beds and pillows, helped restore me somewhat. I enjoyed the evening performances and dinner, in the company of family and friends.

Alas, when I got to the room and tried to plug in my phone, I discovered my charger was missing. I promptly got on Amazon and ordered a generic one to be delivered to our Chennai home on Monday. I went to bed wondering how I would get by the following day, since I needed my phone to take pictures, order Uber, make calls or do the million things I rely on my phone for. Early the next morning, my young genius nephew told me about Dunzo, a courier app. However, he found out that it was not available in Mumbai. But, he said, there was a substitute there, offering a similar service, called Wefast. He then asked for pick up and delivery of charger with cash to be paid on delivery. I had a courier pick up the charger from Marine Plaza and deliver it to Hotel Meluha Fern for less than the cost of travel to said destination one way! I was overjoyed. I promptly charged the phone and took pictures to my heart’s content. Life’s cinch with apps! Why not make the best use of them?!

Posted by Latha Sukumar at 9:43 PM No comments: